When you have a very tiny space, good storage solutions are important. There were four of us sharing our 100 sq. ft. cabin, so every inch of available space needed to be optimized. Here were some of the ways we built storage into our very tiny cabin.

Leaving the walls open to the studs was one of the first storage-based decisions we made. While there’s certainly a lot to be said for insulation, with four of us sleeping in there we needed to optimize space over temperature regulation. The open studs give us places to store books, boxes of matches, decks of cards, toothbrushes, and sunscreen. Pretty much every small item is stashed away on one of the open studs.

Here’s what we did:

Originally, we had thought of putting shelving in behind the door. But after using the shabin, we realized that hanging hats, coats, and bags was more important. So we put up an assortment of hooks on the wall behind the door. (See photo above).

We really wanted somewhere indoors to store our kitchen supplies. They needed to be easily accessible since all of our cooking happened outdoors. So we built a small shelving unit into the foot of one of the daybeds.

Shoes were a perpetual issue. We all had two to three pairs of shoes: water shoes, sandals, and something warmer. Luckily, we also had a lot of extra plywood from our build.

We built an outdoor step that opened up for some hidden shoe storage. However, the favourite shoe storage place was a plywood box at the foot of the other daybed.

After a year of using the shabin, we firmly decided not to insulate the roof. We really just couldn’t manage without the extra 3 1/2 inches of space in the loft ceiling. That meant that there was a gap between the loft and the sides of the wall. And sometimes we accidentally dropped items onto the daybeds below. (It’s a VERY tiny loft!)

Brad used all scrap wood leftover from our original build to make storage cubbies for the loft. Here’s what he did:

It really was a simple design… that is perhaps best illustrated by a few photos.

Eventually, I would love to have custom boxes or storage underneath them. For the moment, it’s a mix of plastic storage bins, cans of paint, power tools, and whatever else we need to stash away somewhere.

The real key to tiny cabin storage is to not own anything extra! 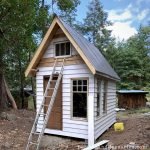 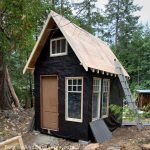 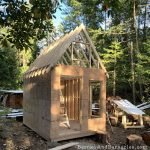 Building A Shabin On An Off-Grid Property 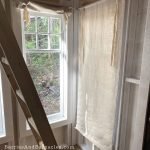 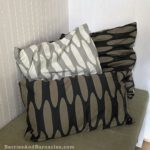 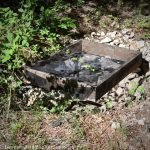